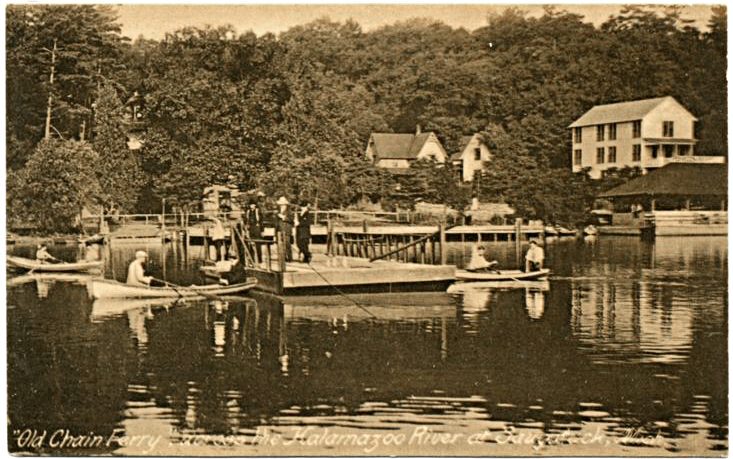 Over 100 years old, the Beachway Resort in Saugatuck, Michigan first opened its doors in 1900 as “Pokagon Inn”, the first hotel on the west river bank. The hotel accommodated 100 visitors and included a 200 ft. dock on the river. The first year must have been very successful because in 1901 it was announced that 50 more rooms would be added. However, in the fall of 1901, the hotel burned and was closed. In 1906 a new owner rebuilt the Pokagon Inn in the Beachway’s current location.

Until the 1930’s the only access to Lake Michigan from downtown Saugatuck was by boat up the river. It was during the 30’s that Oval Beach Road was constructed to connect the west river bank to the lake. Since this left the hotel “the nearest resort to the beach” as the ads said, the name “Pokagon Inn” was dropped and changed to “Beachway Resort”.

In the 1950’s and ’60’s the hotel advertised amenities such as “hot and cold running water” and “toilet facilities conveniently located in all rooms”. A single room cost $3.50/day or $23/week.

After several changes of ownership, the current owner, and longtime resident gained possession of the crumbling building on April Fools Day, 1984. Renovations included a new foundation, new roof, and floor to ceiling makeovers for all rooms. The Beachway Resort & Hotel was remodeled a second time in 1994 to expand the front of the building, adding about six feet to all view rooms.

Photographs of the Beachway Resort & Hotel throughout the ages can be found hanging in the hotel and in the photo albums in the commons area.

Review Your Reservation
Google Reviews
I love this resort. We have been a few times and will continue to visit. The rooms poolside have been newly decorated, clean and are beautiful. The pool is Crystal clear and heated to the perfect temp. I highly recommend and we return again.
Grace Adams
Perfect spot for a nice quiet vacation, rooms are very clean and each one is different. The pool is big and gets 9 feet deep. Staff is always friendly and the town is right across the river.
Noah's Ark
This is my second time here and it was such a beautiful stay. Room was super clean, staff is very friendly and just a beautiful view from the hotel. Plus its close to everything.
Cassandra Lawrence
© BeachWay Resort & Hotel. All rights reserved.